Head to the Coast of Light for phototherapy

We may be on our way towards spring, but we still have a few weeks of winter left. Perhaps we still need to shake off that sense of gloominess, or rather, winter blues. Here's the solution: head for the light. 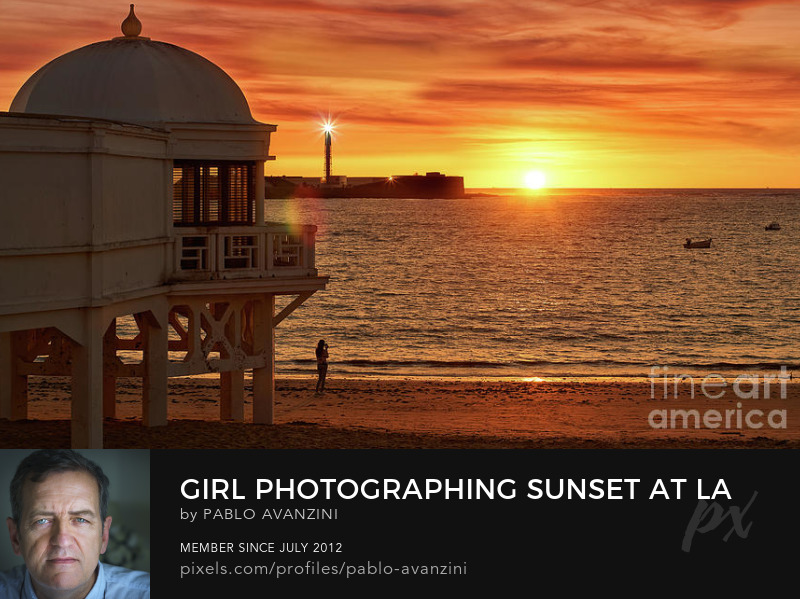 The medical definition of this winter depression is seasonal affective disorder (SAD). Its symptoms are usually more apparent, more severe and even debilitating in deep winter - with late sunrises and early sunsets.

The exact cause of these 'blues' is not fully understood, but it is often linked to reduced exposure to light. According to the main theory, prolonged darkness causes vitamin D deficiency, and by extension, may release more melatonin (a hormone that makes you feel sleepy) and it affects the production of serotonin. Reduced serotonin level results in negative mood shifts, fatigue and unhealthy food cravings.

Psychologists recommend a range of treatments including the most available - lifestyle measures. It is important to get as much natural sunlight as possible, to exercise regularly and to manage your stress levels.

Otherwise, bright light therapy (also known as phototherapy) is an efficient way to ease SAD symptoms. During light therapy, you sit or work near a device called a light box. This viable replacement for natural light emits 10,000 lux of white or blue light. This is quite normal in northern countries and even in quite dull regions of Spain.

In bright Andalucía, the Costa de la Luz (Coast of Light) might be considered a natural 'light box' with exceptional white and blue lights. White sand and sun reflected in the white houses along with the blue Atlantic Ocean and clear blue sky apparently work as light therapy.

The bright Coast of Light

Costa de la Luz is among the least known areas along the Spanish coast although it is renowned for its sunsets. The local people say that the name comes from the vivid sunlight, present here in all seasons. Additionally, that light is reflected in a very special way on its clear and immense sandy beaches.

The sunsets on Cadiz coast are particularly stunning. The most spectacular occur in the far west of the province. And this is not only because it is closer to where the sun goes down but because this area is largely untouched: natural and wild, hence not yet ruined by mass tourism or high-rise buildings.

According to a study by the University of California at Berkley, engagement with natural beauty moderates the positive relation between connectedness with nature and psychological well-being

Such natural beauty will definitely help in relieving winter blues and improving emotional wellbeing. According to the study from the University of California at Berkley (Jia Wei Zhang, Department of Psychology), engagement with natural beauty moderates the positive relation between connectedness with nature and psychological well-being.

Here are my tips for finding the best places to view the sunsets and take impressive photos.

In Chipiona, the high temple - the Sanctuary of Our Lady of Regla - is located by the beach and is especially impressive in the reflection of the sunset.

Rota has its cosy Paseo Marítimo facing west. The path is framed by the walls of the ancient fortress and boasts numerous modern restaurants and bars.

Between Rota and Chipiona you can find the most beautiful beaches of the area where some horses and carriages pass by as well as parents with baby strollers. Silhouetted in the backdrop of the sunset, they look idyllic.

Camping at Costa Ballena is a perfect place for meditation. It is believed that simply focusing on the sunset by watching how its colours and light are changing helps to nurture an inner harmonious balance.

Sanlúcar de Barrameda has its 'Sunset Beach' - on the left bank at the mouth of the Guadalquivir River opposite the Doñana National Park, 'decorated' with its small boats. Moreover, in the centre of the town there is the hotel Guadalquivir, which has roof top café. It is the town's highest building and justifiably boasts the best sunset view in Andalucía.

Popular posts from this blog

Why Costa Ballena, Why The Garigolo 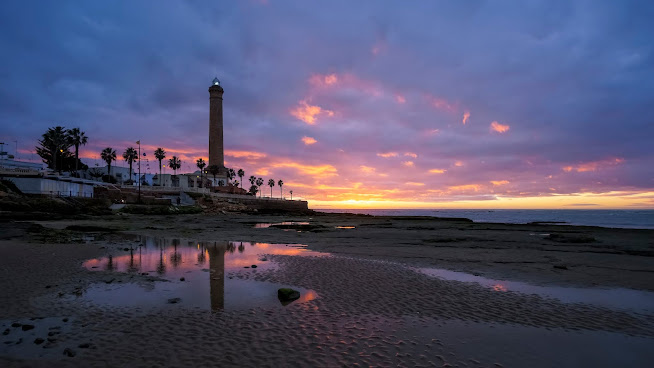 Costa Ballena invites you to rest, go to the beach, play golf on one of the best courses in Spain,  visit the incredible province of Cádiz , a marvel of variety and top-notch natural landscapes, go horseback riding, visit the famous white villages , try delicacies or taste wines, get closer to the fishing villages of Rota, Chipiona, El Puerto de Santa María or Sanlúcar de Barrameda or enjoy open-air activities in the Sierra. A privileged location only a 15 minute walk from the beach Costa Ballena, in the municipality of Rota and  Chipiona , has extraordinary environmental and urban characteristics. Regarding the planning of the territory, it should be noted that the so-called protection zone has a width of 100 meters from the inner limit of the shore to the sea. Thus, the current Coastal Law is complied with, achieving a wide-ranging result on the beach, enhanced by its dune system, with maximum preservation of nature. At the accesses to the beach, the different walkways make it possib
Read more 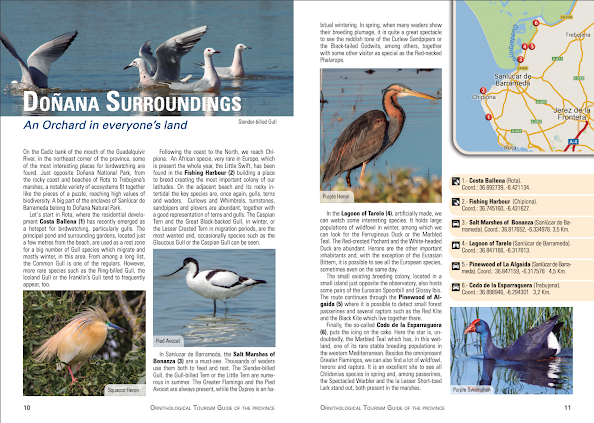 On the Cadiz bank of the mouth of the Guadalquivir River, in the northeast corner of the province, some of the most interesting places for birdwatching are found. Just opposite Doñana National Park, from the rocky coast and beaches of Rota to Trebujena’s marshes, a notable variety of ecosystems fit together like the pieces of a puzzle, reaching high values of biodiversity. A big part of the enclaves of Sanlúcar de Barrameda belong to Doñana Natural Park. Let´s start in Rota, where the  residential development Costa Ballena  (1) has recently emerged as a hotspot for birdwatching, particularly gulls. The principal pond and surrounding gardens, located just a few metres from the beach, are used as a rest zone for a big number of Gull species which migrate and mostly winter, in this area. From among a long list, the Common Gull is one of the regulars. However, more rare species such as the Ring-billed Gull, the Iceland Gull or the Franklin’s Gull tend to frequently appear, too. Following
Read more 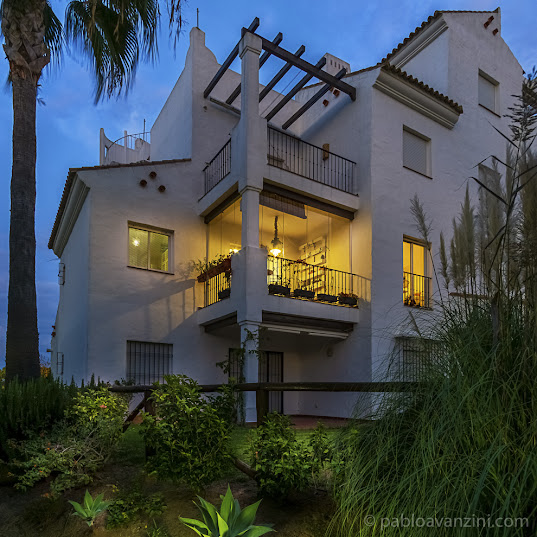 When in September 2000 I moved to live in Costa Ballena, I did so initially for the comfort of living near my workplace as well as by the benefits that I sensed that living in the complex would bring. I must admit that the reward has been great. Year after year, my temporary summer neighbors leave with great sorrow to their cities of origin and congratulate us on how lucky we are to be able to live here all year round. "Everyone dreams of being able to retire and live permanently in Costa Ballena. " Although in summer, as in Rota Pueblo, Costa Ballena comes alive to excess, from September to June it is a delight to walk through its streets, through its 4 km of beach and through its parks and gardens. At the beginning, as in all the urbanizations far from the urban nucleus, we had to go shopping, to the pharmacy, to the doctor, to Rota Pueblo. My daughter, who is currently 20 years old and is in her third year of university, attended school and institute in Rota Pueblo since s
Read more